DTS grad Gloria Furman (MA/CE, 2007) is an award-winning blogger and author who serves with her husband Dave at Redeemer Church in Dubai. Her new book, Treasuring Christ When Your Hands are Full: Gospel Meditations for Busy Moms, was published this week. Read an excerpt.

Ask people what comes to mind when they think of the largest of the United Arab Emirates (UAE), and you might hear “camel races,” “gold souks,” and “outrageous skyscrapers.” But if you asked Gloria Furman (MA/CE, 2007), she would say “home.” After attending DTS she and her husband, Dave (ThM, 2007), left the Bible Belt to serve a congregation in a place where Christians represent a tiny minority.

Sharing the Gospel in Dubai

Living in an oasis where they brake for camels, the Furmans participate in a church-planting movement among English-speaking people in the region. Most who live in the UAE are expatriates. They might be from Syria or South Africa, Egypt or India, Lebanon or the United Kingdom. Dubai, a thriving metropolis full of businesses and industry, has a population that consists of more than one hundred nationalities. But the primary languages number only five: Arabic, Farsi, Tagalog, Hindi, and English. And within this great mix of world cultures, a growing number of people are learning to follow Jesus Christ. 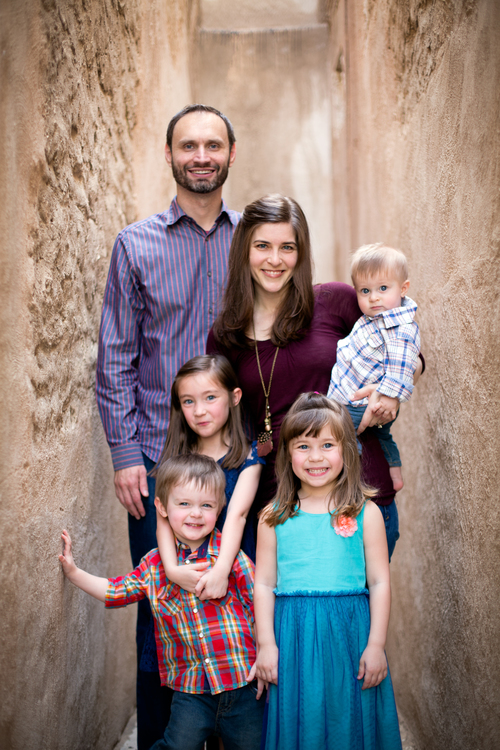 n her new home city Gloria speaks freely about religious topics. She explained, “It is not a taboo or rude to do so here, but intriguing. In the U.S. it might be rude to talk about faith and one’s personal devotional life, but here it is so much the warp and woof of everything that it’s not intimidating to talk to people. Because so few here are Christians, people will say, ‘I’ve always wanted to know,’ and proceed to ask about Jesus or the Bible.”

The most common question people ask her about Christianity is “What’s inside the Bible—what’s it about?” She answers and invites people to read for themselves online.

The Furmans’ time in the Middle East began in a small town where they labored to learn Arabic. Each weekend they made a ninety-minute trek to attend church in Dubai. “We’d crash on couches and in living rooms and guest rooms every weekend for six months,” Gloria recalled. “At that time we had one child and one on the way.”

During those weekends, the Furmans participated in the life of the church, met with leaders, and prayed that God would open a door to plant another one with the help of the existing evangelical congregation. After six months, the leaders asked Dave to serve as their church-planting coordinator. So the Furmans moved to join them.

Dave began vision casting with the elders, developing staff, and training leaders. Today he serves as senior pastor of a new church plant, Redeemer Church of Dubai, and is working to establish pastoral training resources. “We continue to be amazed at all that the Father has done,” Gloria said.

Finding God in the Mundane

All of these developments happened between the births of their first child and their fourth. During this time Gloria focused on parenting, continuing language study, and supporting her husband as he trained leaders. But she also began to write more than the blog posts that kept her family back home happy with updates.

“I talk to lots of women—homemakers especially—who feel the only time they can fellowship with God is when all is ‘just so.’ But nothing will ever be ‘just so.’”
—Gloria Furman ​

Her theme was finding God in the mundane. “I had jumped from being a full-time grad student at seminary with part-time jobs to being a mom,” Gloria recalled. Their first child was born six weeks before graduation. “I had to bring her to class so I could finish. Then we were on the road fundraising. I went from having adult conversations to ‘which pacifier does the baby like?’” Following season after season of transition with no settling, loneliness set in. “I processed it all by writing,” Gloria said. After moving to the Middle East she carried around an index card with a golf pencil and wrote what she described as “disjointed thoughts.” She said, “I’d stick those cards in my purse, and they’d get bent five ways. At the end of the day I’d try to make sense of what I’d written, and often I couldn’t. When I got a smartphone with a notes feature, my writing made more sense.”

The reflections typed with her thumbs continued her focus on finding God in the mundane, drawing metaphors and similes from her everyday life. “Take our hand wash,” she said. “It’s 99.9 percent effective. But what about that 0.1% that’s not effective? Compare that to the cleanliness we receive when Jesus makes us pure. It’s perfect.”

A Ministry of Words

As Gloria was developing her writing voice, she remembered some advice she’d received—to give away dozens of pieces as she honed the craft. And her generosity paid off. The Gospel Coalition picked up some of her posts, and she developed a following.

As Gloria was building this platform, her author friend and fellow DTS graduate Jennie Allen (MA[BS], 2005), along with their husbands, met for fellowship while the Furmans were on a road trip in the States. Gloria recalled, “Jennie was listening to my stories, and she said, ‘You should write these. Make them longer than a blog post.’ She told me to put them together and write a book proposal. Dave overheard and told Jennie he’d been telling me the same thing.”

Dave kept encouraging Gloria to put together a proposal. So when Dave was otherwise occupied with training for a month, Gloria punched out her concept for Glimpses of Grace. She laughed as she recalled, “After I finished it I attached it to an email to him—he was sitting next to me on the couch.” Her subject line said, “So there!” That proposal eventually landed at Crossway.

Once published, Glimpses of Grace: Treasuring the Gospel in Your Home resonated with many readers. In fact it won the Christianity Today 2014 Award of Merit in the “Her.meneutics” category. CT’s reviewer Megan Hill wrote, “At first glance, this book might seem most appropriate for homemaking moms with young children. But Furman has much to say to any woman concerned about God’s glory. Who can’t relate to her stories of couch cushions distracting her from prayer or the morning her last coffee filter went AWOL? More than practical tips for holy living, the book is a beautiful theology of the mundane: fresh, honest, and filled with the good news of Jesus Christ.”

Gloria’s newly released second book has a more limited audience. Its title tells it all: Treasuring Christ When Your Hands Are Full: Gospel Meditations for Busy Moms. Its content is unique because, as one critical reviewer wrote, “She just keeps talking about the gospel. Every page. Jesus. The cross. The atonement.” What the reviewer meant as a criticism, Gloria took as a compliment, because she intended that singular focus. She said, “I talk to lots of women—homemakers especially—who feel the only time they can fellowship with God is when all is ‘just so.’ But nothing will ever be ‘just so.’ Consequently, they tend to view every interruption as being ‘from Satan.’ A two-year-old might need his shoe tied, and if that mom is trying to pray, she resents the ‘interruption.’ So my focus is on considering the one great permanent circumstance in which we live and move.”

Her emphasis on the uniquely Christian message also comes from living in the Middle East. Gloria said. “I can’t go out with my neighbor and simply say, “God is good,” because she will say, “Yes,” even though she worships a different god. So in my speaking and relating to people, I have to be explicit when I speak of grace, hope, love, forgiveness, and all the things we adore about Jesus. To communicate well I must say ‘Jesus,’ and ‘the Cross,” because he is revered as a teacher and appreciated in some religions, but he is not viewed as the Savior of the world.” 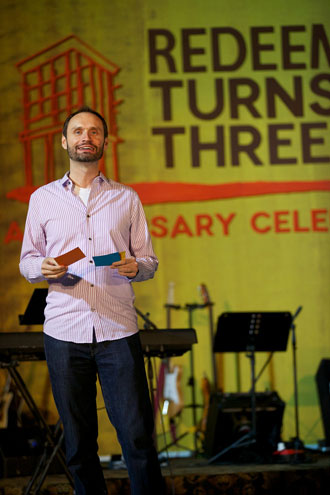 Longings for another world also shape Gloria’s message. When Dave was still a seminary student, his pinkie started twitching. Then his hand started twitching. Then his elbow. Finally, the action became bilateral. He tried physical therapy and occupational therapy. He tired acupuncture. And medications. But nothing helped. He had surgery—in both arms. That helped for a few months. But his limbs returned to their pre-surgical condition.

Gloria recalled, “His arm simply stopped working. It was scary and depressing. We were in the middle of culture shock and learning the language, and I was pregnant. Dave fell into a depression, and I was teetering with him—it was a really dark time. We found ourselves with the only consistent thing to cling to: Christ, who never changes.”

Dave has since had numerous procedures including multiple surgeries and seventeen hospital admissions in eight years. He lives with chronic pain that includes burning from elbows to wrists. In his words, “It’s like white noise.” Some days are worse, depending on whether someone bumps him in the elevator or he turns a knob to a door that happens to be locked. These increase the pain and make it difficult for him to sleep.

His symptoms have a name: Ulnar Nerve Syndrome. Living with it, Dave types his sermon every week as well as preaches and leads a staff. Together the Furmans offer living water to the approximately seven hundred adults who attend Redeemer Church. Some of the Furman children—who now range from toddler to age seven—fasten Dave’s buttons for him, and he relies on others to drive him around. “Our life has been significantly modified by his disability,” Gloria said. “It’s degenerative. We’re not waiting on a new drug. There’s just pain management.” At ages thirty-five and thirty-four, the couple—who have wisdom beyond their years—expect to spend the years ahead dealing with Dave’s chronic pain. Gloria said wistfully, “We have prayed for healing…. Dave never picks up our babies. He picked up our third when he was tiny, but he couldn‘t hold him any more after a few weeks.”

Having said this, her thoughts pivoted to a greater reality. “Christ has to be our consistency in chaos and craziness. And in our silence and peace. He is the only thing that matters.” It is a message they are both taking to the world.

More from the Furmans

Photo of Dave Furman at Redeemer Church by Kevin Cathey

Sandra Glahn
Dr. Glahn serves as associate professor in Media Arts and Worship and is a multi-published author of both fiction and non-fiction. She is a journalist, and a speaker who advocates for thinking that transforms. Dr. Glahn’s more than twenty books relate to bioethics, sexuality, and reproductive technologies as well as ten Bible studies in the Coffee Cup Bible Study series. She is a regular blogger at Engage, Bible.org’s site for women in Christian leadership, the owner of Aspire Productions, and served as editor-in-chief for Kindred Spirit from 1999 to 2015.
Tags: Middle Eastmissionswomen in ministry

Raquel P. Wroten
Celebrating the Retirement of Dr. Mark L. Bailey after 19 Years as DTS President And we all, who with unveiled faces contemplate the Lord’s glory, are being transformed into his image with ever-increasing glory, which comes from the Lord, who is the...
Campus News

A Prayer and a Plea for Our Nation   Righteousness exalts a nation, but sin is a disgrace to any people (Proverbs 14:34, nasb). As we watch the news and see our city streets in turmoil, my heart, like...
Ministry

Darrell L. Bock
Reviving Evangelism In this episode, Dr.Darrell Bock, Nathan Wagnon and Kevin Palau discuss evangelism, focusing on how the Church can respond to an apparent downward trend in personal evangelism.
Bible