In the fall of 2013, Dallas Theological Seminary announced a groundbreaking partnership with Logos Bible Software that gives every DTS student access to a package of resources worth over $14,000.

What few people know is that 2014 marks the 25th anniversary of DTS's first pioneering foray into equipping godly servant-leaders with modern Bible software. In the 1980s, when less than half of pastors used a computer for sermon preparation, DTS created a revolutionary new program called CDWord Library that had far more advanced biblical and linguistic tools than anything available at the time. CDWord was ultimately sold to a young company called Logos Research Systems, where it was reworked and expanded into the powerful software that is now installed on every DTS student's computer, tablet, and phone.

In the mid-1980s, accessing in-depth Bible study tools meant searching the card catalog of a theological library and assembling a stack of the appropriate translations, lexicons, atlases, and commentaries.

DTS believed technology could make Bible study both easier and more meaningful. The Seminary envisioned a computer-based library of resources, a digital “Expositor’s Assistant” or "Exegetical Toolkit" (as the project was originally known). Two Dallas businessmen provided funding, and the DTS Board of Incorporate Members approved the plan in 1987.

“Our dream was a program that could get you to resources directly,” said Dr. Bock, executive director of cultural engagement and senior research professor of New Testament Studies. He served as chair of the development committee, which included Robin Cover, a former professor of Old Testament Studies, and Jon Boring, a ThM student with a computer science background.

In brown bag lunches, live demonstrations, and countless faculty meetings, the team sought input from dozens of professors, students, and alumni thoughout the development process. Notes from those meetings record the student body's excitement about the project, and their sense that this was an opportunity for DTS to set the standard for digital Bible study. 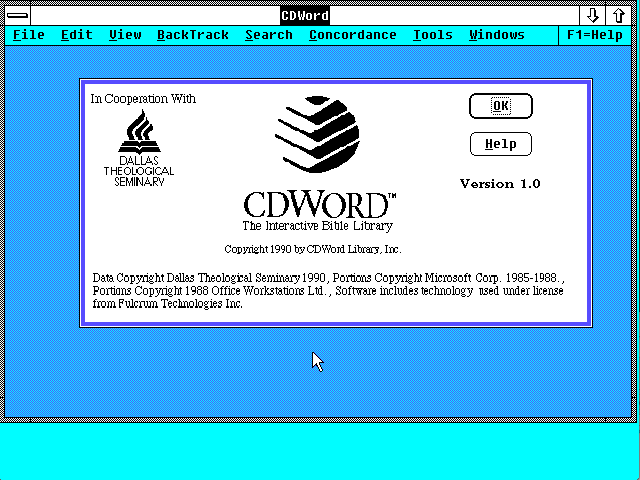 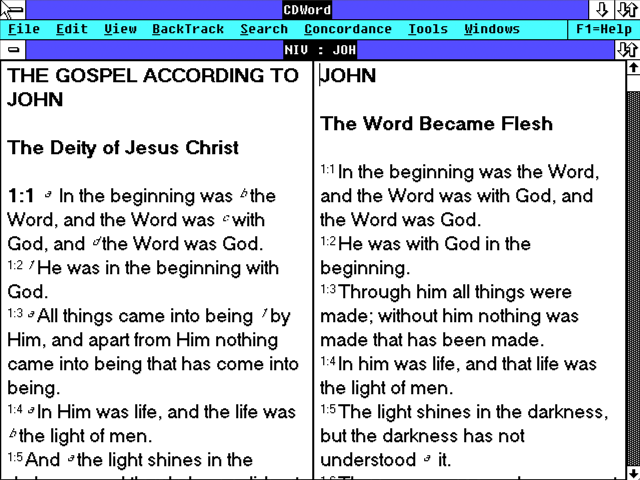 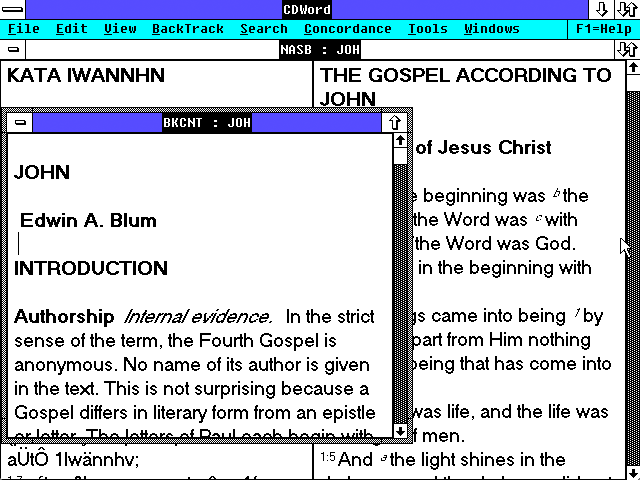 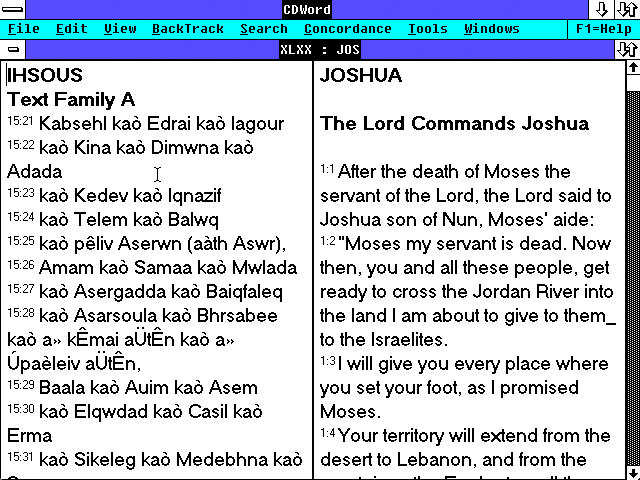 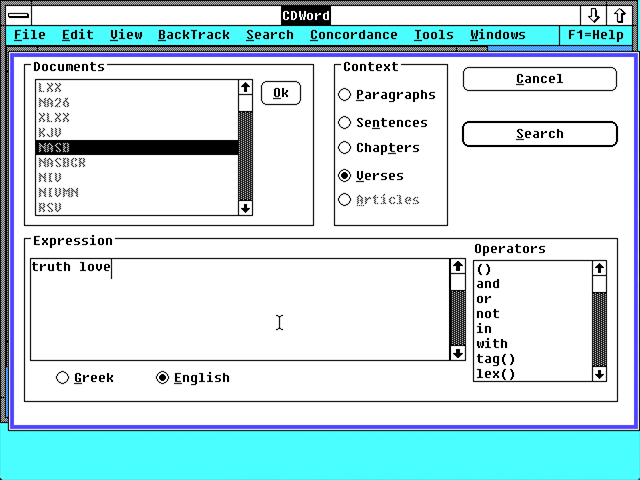 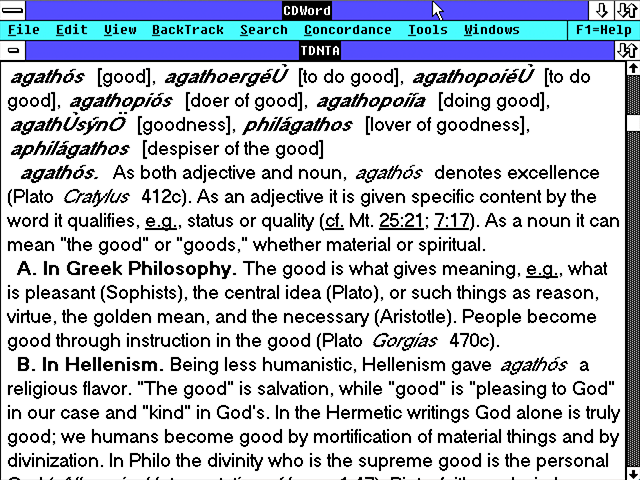 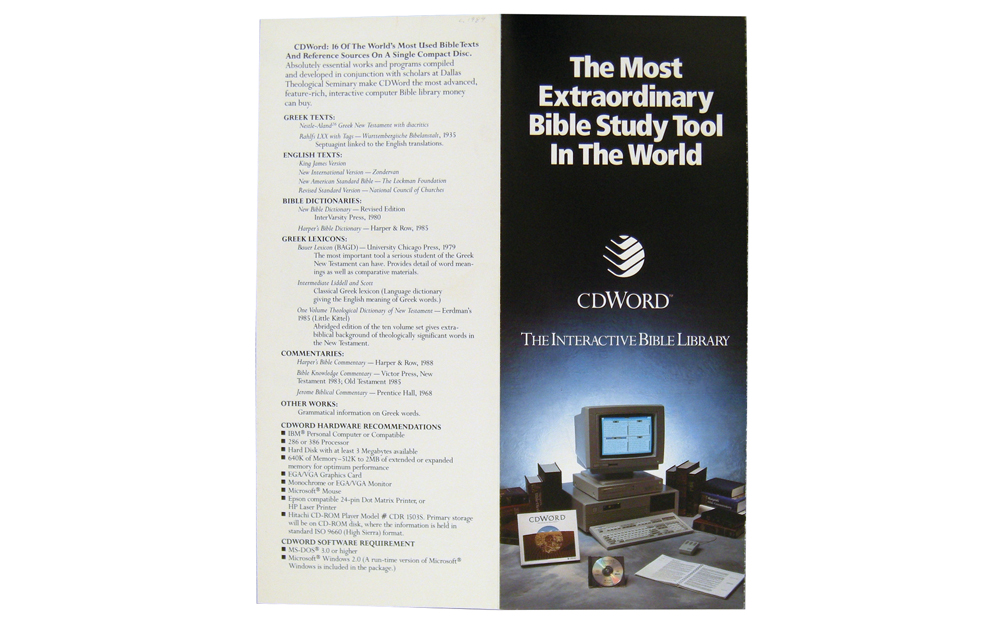 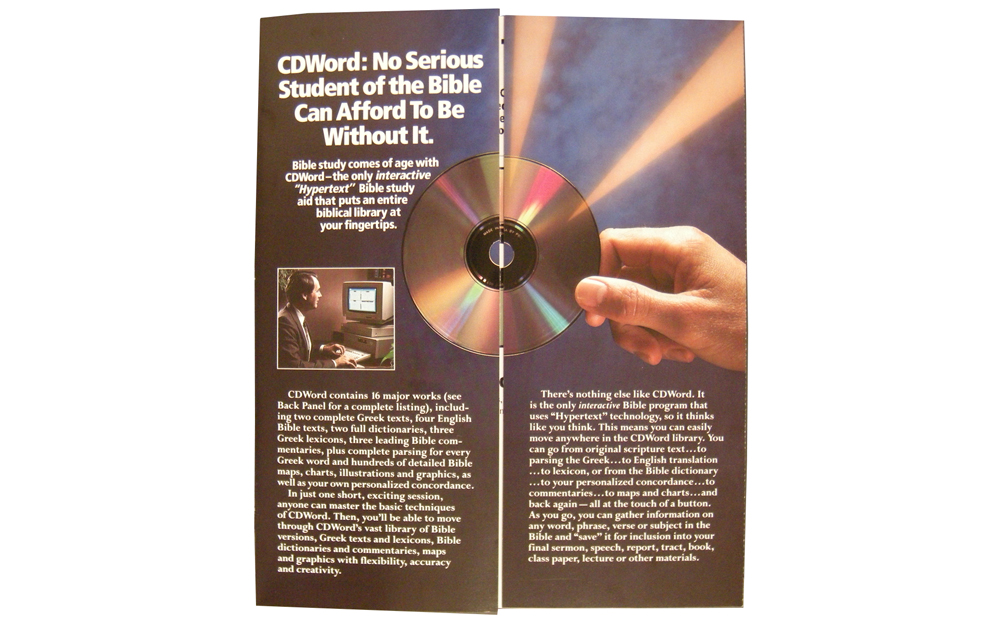 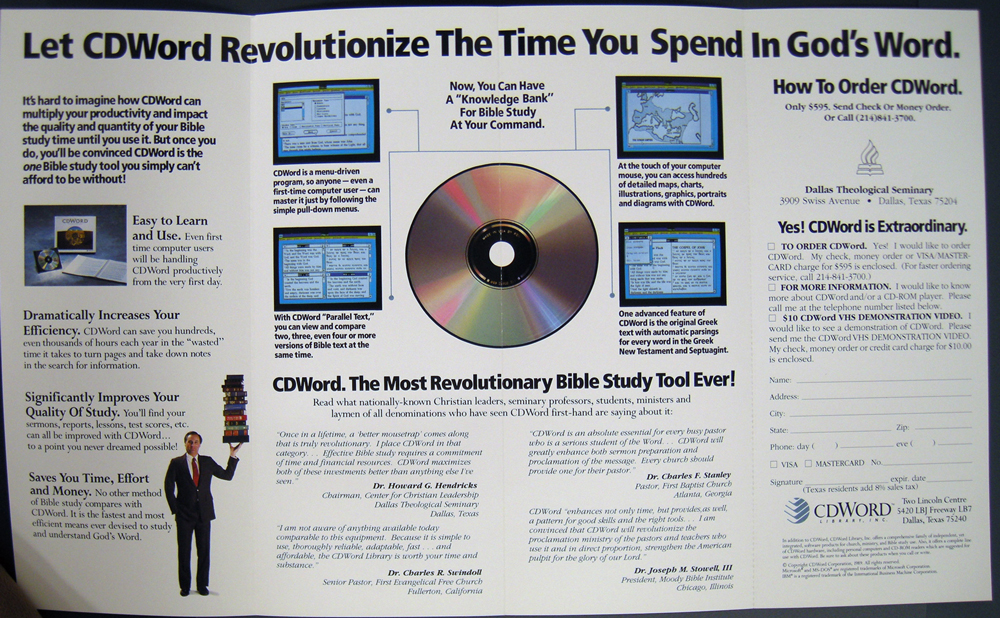 The program the team created was a Windows-based tool that used hypertext technology to link pieces of scripture to resources that had previously not been available in an interlinking electronic form. The package included:

"CDWord: The Interactive Bible Library" hit the market in 1989. The set of CD-ROMs cost $595, and interested customers could send away for a VHS demo tape for $10.

Since most computers at the time did not come with a CD-ROM drive, users had to purchase the hardware separately, which cost at least as much as the CDWord package itself. The team reasoned that the hefty price tag was still far less expensive than assembling a personal library of the same resources.

As Dr. John Hannah recounts in his history of the Seminary (A Common Union),  the project was hailed by the DTS Board as a “major innovation in computerized Bible study.” Calling CDWord "the only interactive Hypertext Bible study aid," the Seminary's early promotional brochures explained that "special computer 'links' within the translations enable you to locate related articles quickly and easily on the same screen!"

“This has to be one of the most remarkable Bible-study tools ever developed,” reviewer Michael Duduit wrote. “CDWord Library will even parse every word in the Greek New Testament and Septuagint. Where was this when I was in seminary?”

The article went on to explain what a compact disc looked like and how to connect a CD-ROM drive to a computer.

Even after counting the costs of the software and hardware, the review encouraged readers to “make the investment in both a CD-ROM drive and in CDWord Library. If nothing else, put it on your Christmas list!”

"CDWord is an absolute essential for every busy pastor who is a serious student of the Word. . . CDWord will greatly enhance both semon preparation and proclamation of the message. Every church should provide one for their pastor."
– Dr. Charles F. Stanley, Pastor, First Baptist Church Atlanta

CDWord "enhances not only time, but provides, as well, a pattern for good skills and the right tools. . . I am convinced that CDWord will revolutionize the proclamation ministry of pastors and teachers who use it and in direct preparation, strengthen the American pulpit for the glory of our Lord."
– Dr. Joseph M. Stowell, III, President, Moody Bible Institute

"Once in a lifetime, a 'better mousetrap' comes along that is truly revolutionary. I place CDWord in that category. . . Effective Bible study requires a commitment of time and financial resource. CDWord maximizes both of these investments better than anything else I've seen."
– Howard G. Hendricks, Chairman, Center for Christian Leadership

Despite users' enthusiasm, low sales coupled with the escalating cost of development and copyrights undermined the financial viability of the CDWord project.

“We designed the program for CD-ROM as they were just becoming useful, but we were a little ahead of the game in terms of the use of peripherals,” Dr. Bock said.

Eventually, DTS removed itself from the software business. At its meeting in October 1991, the Board acknowledged that the CDWord project had begun to incur serious financial shortfalls. In December of that year, the Board agreed to sell the technology to the young Logos Research Systems, whose previous Bible study program had included just two translations and three external resources. Throughout 1992, Logos took on responsibility for the CDWord updates and incorporated the data into its Logos 1.6 software and later releases.

Preaching magazine was excited about the partnership with Michael Duduit writing, "The link of these two programs should provide a remarkable resource; I'm looking forward to seeing the first release from this alliance later in the year."

“Logos knew what to do with the program and had a solid business plan for it,” Dr. Bock explained. “They rewrote the program completely and used the data we created to take it places it needed to go.”

He calls the CDWord project “a story of God’s providence” for the way the software has continued to benefit the kingdom despite its own short shelf life.

The Future of Biblical Training

Although CDWord fell by the wayside, Logos and other digital Bible study tools have vastly expanded the average believer’s access to information.

Logos' current starter package, for instance, includes 32 translations of the Bible in English alone. Users can download mobile apps and sync information across all of their devices. And many software companies are experimenting with a multi-faceted media approach that incorporates integrative maps and videos.

So what’s next for Bible study technology? Dr. Hall Harris, professor of New Testament Studies and an expert on technology in ministry, has some ideas. He speculates that we might someday see implantable “content chips” that could make information available without external devices, and perhaps even 3-D immersion experiences that would allow participants to walk through virtual recreations of ancient Israel.

Dr. Harris likens the current digital revolution to the invention of the printing press and vernacular Bible translations 500 years ago.

“Thanks to the internet and online resources, everyone is awash in a sea of information. The facts are now generally easy to find,” he said. “But the significance of those facts, how they fit together and what they mean, are more elusive.”

No matter how technology changes, the expositor’s task remains unchanged: to prayerfully and thoughtfully exegete the Word, illuminating the gospel in all 66 books. DTS is committed to using technology from print to projectors to iPhones to equip godly servant-leaders to boldly and accurately proclaim God's word.

For more on the history of the CDWord see the following resources: